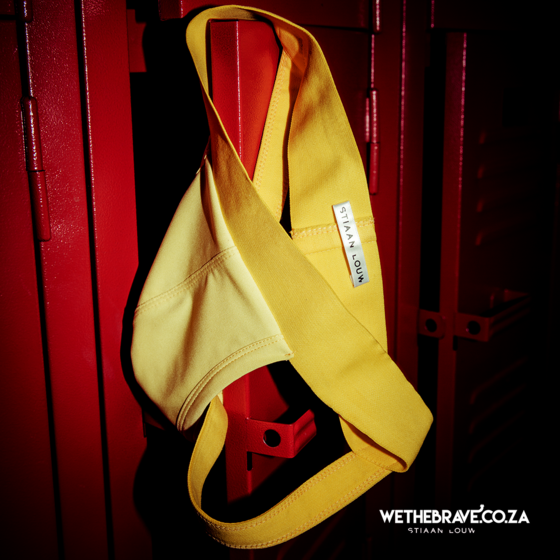 Cover Your Butt is We The Brave’s latest campaign promoting prevention, testing and treatment for HIV in the MSM community (men who have sex with men). This campaign embodies everything we stand for when it comes to bringing sexy back to safe sex.

The message was portrayed to the world through our collaboration with Stiaan Louw, a South African designer who focuses on high-fashion underwear aimed at men, through an exclusive range of haute-couture undergarments branded, ‘WE THE BRAVE X STIAAN LOUW.’

“The way Cover Your Butt approaches the issues is really positive. Nobody wants to talk about HIV and these sensitive issues, and so making it fun, incorporating a piece of colour associated with the brand and giving somebody a piece of underwear is like saying, ‘Hey, go out and have fun but inform yourself.’ I think that is what is important.” – Stiaan Louw

What made you say, ‘Yes,’ when we asked you to collaborate on a range of underwear?

What is exciting about this project is the way you are presenting the subject in a positive way that is visually stimulating and appeals to people, especially in today’s visually driven culture with things like Instagram and Snapchat.

To get this message across I think it is incredibly important to do it through the right means and have the right images that speak to people in a way that they identify with. To me this campaign was very exciting in that you wanted to incorporate my brand, which is largely aimed at gay men as well. While I know this particular project is aimed at men who have sex with men I think it is definitely in the same demographic and I was very excited to incorporate your message into my brand too.

What inspired you while creating WE THE BRAVE X STIAAN LOUW?

To a certain extent it’s a continuation of what I do and to come back to the Cover Your Butt brief, it was such a good fit when our two brands came together. I adapted what I normally do to work with Cover Your Butt and finding a middle ground was a lot of fun.

In terms of the colour, that was really exciting because I don’t normally work with colour and it was awesome to work with We The Brave’s bright blues, oranges, reds and pinks – especially to do that bondage-y kind of look with pink.

We loved the pink! What was your studio’s reaction to this range?

They really responded to the colour, especially the pink. It got a tremendous reaction at the studio and a lot of the females at the studio responded saying they wanted the underwear for themselves, obviously in their fit. I think that is quite awesome, that the underwear has that fluidity to it.

Would you do it for girls?

Is it correct to call this ‘lingerie for men?’

‘Lingerie,’ isn’t a term that offends me per say, but I think today there is a constant blurring of lines that it hardly matters. I don’t think people really care in terms of market. Especially the market I deal with. Gender is so fluid it doesn’t matter at all. I just call it ‘underwear’ but this range does blur those lines intentionally – I can see that – what is considered male and female underwear. I think the market is open to that; men are increasingly becoming open to experimenting with underwear that was traditionally for women.

To come back to the inspiration, I love the idea of using mesh and being able to cover the back of the brief while simultaneously being able to see through the underwear – leaves something to the imagination.

The mesh was a great interpretation of ‘Cover Your Butt.’

In terms of the underwear I created for you, I never considered cleaning up the looks or making it safe because I think that would have been boring and for you to get your message across you need to grab people’s attention and whether that is making them uncomfortable or whether it really excites them, you’re getting through to them.

The garments were worn at Cape Town Pride this year. What reaction do you hope to see in the community to this work?

I’m hoping it will inspire people to go to your website and inform themselves.

How do you think fashion of this high standard makes a difference to the message?

You need to understand who your market is and what is visually stimulating to them. This is very important in order to create images that appeal to men who have sex with men and anybody else for that matter. It has to be of a high quality because people are becoming so educated when it comes to images and how they are treated. There is so much out there on social media that it becomes very, very important to focus on grabbing people’s attention. If you don’t do this, you might as well not bother trying to communicate your message.

Stand a chance to win one of 30 exclusive pieces from the WE THE BRAVE X STIAAN LOUW underwear range. Click here to find out more on our Instagram

HIV-related stigma within the gay community has been around since the emergence of the pandemic.…

It’s Pride season guys, and if you’re anything like me, you’re ready to fluff out…