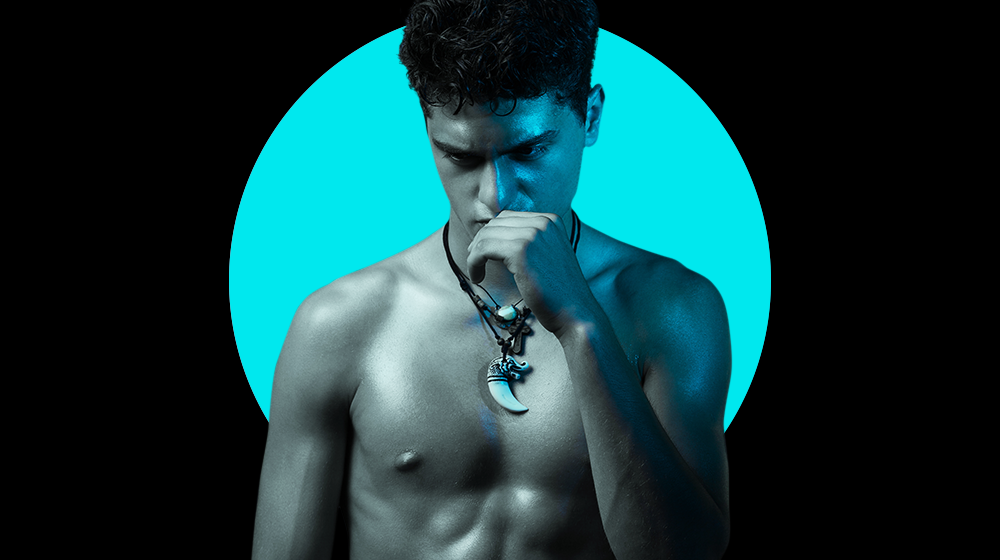 Mark phoned twice asking for directions, reiterating that he was a very horny stud. He entered looking tired, hugged me in a weeping-willow-in-the-wind fashion and confessed that he was a bit tipsy. He plonked down on the couch, legs apart (supposedly in an attempt to appear irresistible) and patted the space beside him invitingly without taking his eyes off my crotch. Almost instantly I felt my cock-ring slipping. His hands moved to his thighs as he told me to help myself. And don’t be shy. From where I was standing he looked like a walking frame that got run over by a car. Twice. And that’s when I fled to the kitchen to get him a beer and retrieve and hide my bling.

I almost dropped the can when I returned and caught him fluffing a flaccid piece of skin resembling a used condom. But he persevered, started slipping out of his trousers and suggested I massage his naughty prostate with my rod; and that would perk up his petulant puppy in no time. The more he encouraged me the more my appendage shrunk away.

He seemed to be totally in control. But I found my voice and confronted him, told him to put that thing away. When he left his house he was 35. In the twenty minutes it took to get here he had aged at least 15 years. How is it possible?

He was meek as a lamb and wanted to know if I really found him that unattractive. Well, lying is very unattractive. I don’t like to be made a fool of. He should’ve been honest from the start. There’s the door…

In a way I pitied the guy but that was the last time I invited a total stranger to my house, let alone in the middle of the night. Had I not been so gullible, or known about catfish, I could’ve sussed him sooner. But what difference would it make; he’s probably back online and somebody else’s problem…

The World Wide Web recently celebrated its 25th birthday. The constant ululation of smartphones and tablets around the world is not only arousing more (technological) frisson than ever before but it is also luring more predators and makes it a lot easier for people to lie online. We build bridges to new people with the tap of a finger and burn them just as easily. But do we realise how many we are letting (back) in under false pretenses? The high concentration and user-friendliness of connectivity makes it increasingly difficult to control what we bring into our homes. But we need to be diligent and responsible and ensure that we keep up to date with malware, spyware and viruses – as is the case with our hook-ups.

We all, at some point, wish that we could change something about ourselves, be it a better physique, thicker hair, an engaging personality; the list is endless. But when it comes to sexually transmitted infections (STIs) it gets a little bit trickier as it is wrapped up in many social constructs. People fail to disclose positive STI results for a number of reasons. Probably the most common one is shame.

Sexually transmitted diseases are highly stigmatised in many cultures, and it can be extremely difficult to have a discussion about an STI infection when you’ve just met somebody or in the early stages of a relationship. It doesn’t help that talking about sex can be extremely difficult for many people, even without the baggage of an STI diagnosis. Figuring out when it is the appropriate time and place for the talk to take place is also not easy. Too soon, and it may feel like the sex conversation will interfere with the process of getting to know each other. Too late, and there is the risk of causing resentment or feelings that someone has been put unnecessarily and unfairly at risk.

It’s also important to mention that punishing people for failing to disclose an STI diagnosis is not actually a terribly effective way of reducing STI risk in the general population. Individuals can and do remain unaware of asymptomatic STIs for years. Many doctors do not reliably and regularly screen their patients for even the most common bacterial STIs – let alone the highly stigmatised infections such as HIV and syphilis – and as such the majority of people who are infected with STIs are probably unaware of that fact.

It’s a tricky thing to try and figure out fact from fiction in cyberspace. Versatiles are bottoms, sporty body types are average Joes and the few that are brave enough to disclose their status (even with an undetectable viral load) get shunned in favor of the so called ‘negative’. We shouldn’t be conditioned by catfish to the extent where we become sceptics because we all have our fantasies – but keep it honest, as long as your interactions don’t harm anybody.

Just remember, we all have feelings. We do what we can but at the end of the day the onus lies with ourselves to be informed and to make responsible choices. And if you don’t like Condoms, try the bubblegum flavour.

Stigma is the real issue. The first thing is that some people worry that if…

A memo on manscaping for the “cultivated” queer

We asked a handful of gay guys to share their intimate grooming tips. First, they…

If you go down to the woods today, you better know what it takes to…