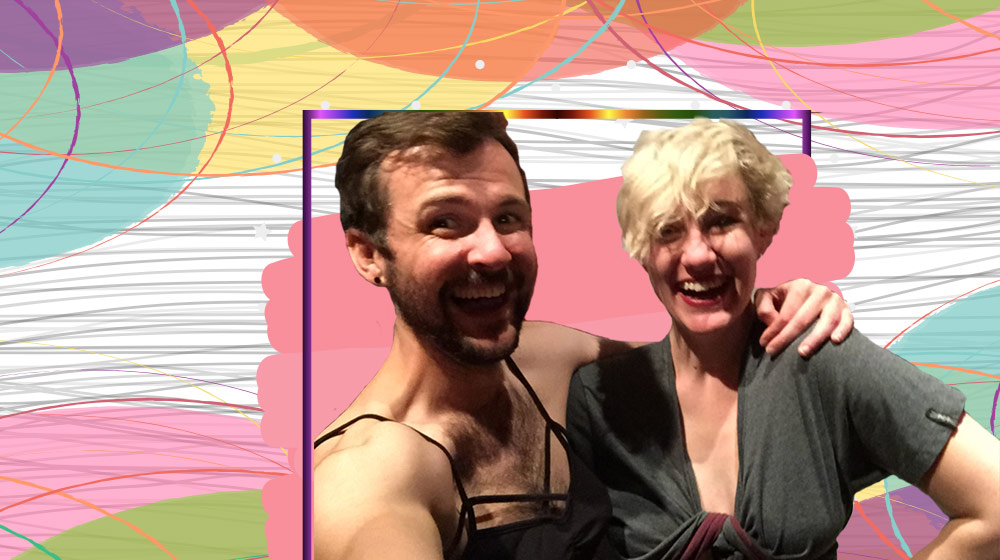 A typical Saturday night when my spirit animal, Gawie, and I lived in the same city was spent stumbling into the unisex bathroom of Babylon. On one particular night of bad decisions and Britney Spears remixes, the stumbling was followed by a frantic yanking off of garments, Gawie squeezing his luscious chest hair and toilet paper into my strappy bra, and me taking another ill advised vodka shot. A voyeur, sloppily slumped against the toilet, eyeing us with a glaze of tequila and cultural recognition, joins in our revelry with a screech of… “You guys are so cute, is this your Gay BFF?!”. Gawie and I share a quiet moment of discomfort, neither of us answering the question as to whether Gawie is, in fact, my Gay Best Friend Forever. To be honest, not much time was given to answer as she lurched gracefully forward, head first, back into a cubicle and so we continued our night without much consideration. Only a couple of weeks later did Gawie and I discuss how uncomfortable the term made us feel, particularly when married with its equivalent for me – his Fag Hag.

The Gay BFF and Fag Hag are casual terms flung around the intersection where gay men and straight women collide (collision, in my introduction to Gawie, is of the bump and grind kind on the dance floor). A term that is used in the bathroom at Babylon and globally perpetuated through mainstream media. This media would have us believe that the relationship between a straight woman and gay man is one not of authentic connection but rather of propping. A gay man props himself with a Fag Hag and a straight woman props herself with a Gay BFF. While these terms have often been adapted to suit their pop cultural context the gist of these relationships, as told to us through media like Sex and The City, Mean Girls and even current, arguably more reflective films like G.B.F , is one dependent on a very specific set of stereotypes. A sassy, gay man with amazing style makes over his desperate lady sidekick while they brunch, gossip and talk about anal sex.

While I love all of these things, the discomfort shared between Gawie and I that night stemmed from our relationship being represented as entirely premised on these very limited experiences.

The terms Gay BFF and Fag Hag, in mainstream media, create a set of problematic assumptions. That Gawie can be reduced to a “type” and a sexual novelty; not my best friend but my GAY best friend and that the label is associated with aforementioned gay activities and tropes instead of the myriad of interests that he actually holds. It positions me as needing a gay man able to fulfil some of my silly, embarrassing womanly desires (like gossip and make up) that have been so long ignored by the straight thinking, hetero dudes in my life with more important stuff to do. It also keeps me as a device to fulfil Gawie’s gay activities as a strange, brunch obsessed tag-along. In short the terms, as they stand, undermine the nuances of our relationship. A relationship that is informed, in part, by both of us occupying similar positions in, and outside of, a heteronormative system.

Academic considerations of gay men and straight women relationships show the negotiation of social roles and stigmas that have been enforced by systems of misogyny and homophobia to be intensely complex. “Othered” by a patriarchal dynamic that engages gay men as inside the masculine fold but excluded by their sexual preference, and women excluded by their gender, the relationship between gay men and straight women can be considered a potential moment of resistance to the systems that have denied them. Intersecting experiences occupied only by us as outsiders of the heteronormative framework could result in an empathetic and potentially powerful relationship. It makes sense, therefore, why a straight, male dominated media system may choose to represent this very important relationship as frivolous and contained to ladies and gays talking about glitter.

My experiences of the gay man/straight woman intersection, like most other people in the same situation, have been liberating and authentic. I was once on the receiving end of some crude sexual harassment while on a project with Gawie. A careful negotiation happened. Gawie knew, as a man relating to another man, that he could protect me, that he would be taken seriously by the other man, that he would be fulfilling a masculine action that would be respected. However, he knew as a gay man, having being marginalised in his own experiences that he might be furthering my moment of being undermined. We concluded by me having a shout at the sexual harasser with Gawie standing close behind me, looking threatening, and giving my hand a little, comforting squeeze afterwards. Ours is not vacuous relationship premised on butthole bleaching and bitching but moments of genuine support as we fight some casual misogyny.

So while the names Gay BFF and Fag Hag feel catchy and innocent, when we use them we may be undermining some very important relationships. I vote for a new set of descriptions, ones that don’t too quickly define or limit the possibilities, ones that make sense to pop culture but aren’t controlled by it. Or maybe I’ll just continue referring to Gawie as my spirit animal and be done with it.

A Mental Health Melt Down

We The Brave – Glory Hole

TROLLS ON THE GRIND

Trolls on Dating Apps may have personality disorders – say, experts. If you’ve surfed the…