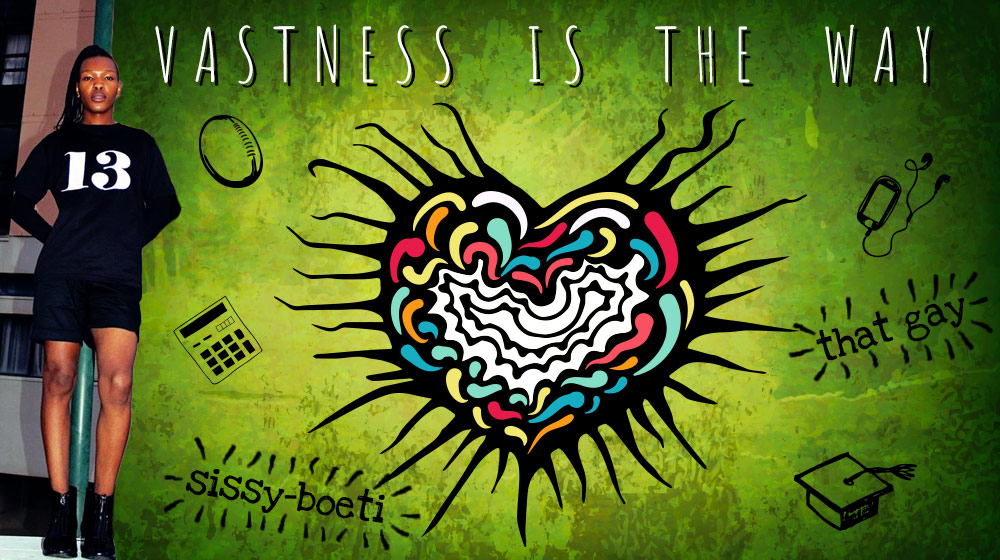 My name is Vuyisani Bisholo. I am a second year Finance with Accounting student at the University of Cape Town. I was born in East London in what used to be a small Village, Nxarhuni, but is slowly becoming a huge Township. Growing up in a small conservative environment like that was not easy at all, from being called names at school to being condemned at the Kingdom Hall of Jehovah’s Witnesses as I grew up as a Jehovah’s Witness. Even though I was the brightest kid at school, people did not seem to care. All they cared about was my peculiar personality and squeaky voice as they concluded that I was not boy enough. The world told me that I was gay before I even thought about sexuality or dating, and they persecuted me for it as though it was my fault that I did not meet the recognition criteria of a cis heterosexual male – as if I knew what that meant at the time.

Primary school was the worst time of my life as even teachers started calling me “sissy-boeti” and gave me all the leading female roles in school plays and dances as they explained that I could bring out the characters better than my peers. It was weird because I would hang out with girls during the lunch break but play rugby with the boys during the sport period. I was one of the best rugby players at the school but that did not matter, I was just “that gay”. Due to such a terrible experience in primary school, I made a conscious decision to be as ‘Straight’ as they come in High school in order to avoid such embarrassment and persecution. It worked because I left high school without anyone knowing that I was gay even though that was my gayest time growing up. That is during the time I had my first partner and sexual encounter but no one suspected anything because I had mastered the straight-act. Even though I had carefully avoided the name-calling and persecution, hiding who I was ate me up inside especially with the constant admonition against homosexuality at the Kingdom Hall. It made me question everything I believed in, everything that I stood for because I was very religious at the time. I did not just attend meetings at the Kingdom Hall because my family wanted me to; I actually wanted to and enjoyed it fully. The best thing about being a Jehovah’s witness was the joy and calmness of mind I found in spreading the good news and making disciples of the lord. But as I grew older, all that I found my joy in doing started causing me huge heartache as I felt guilty for my gayness. I felt that I was being hypocritical to the point where I stopped enjoying all the things I did as a Witness.

In my matric year in Cape town, I came out to a friend of mine who I was interested in and even though he turned down my proposition he was a good and supportive friend. That same year my aunt who I stayed with in Cape Town found out that I was dating a man. She reprimanded me and took away all my devices which I could use to access the internet and social media in order for me to stop talking to my boyfriend at the time. She also reported me to the elders of the congregation and I was prayed for and began to read the bible more rigorously. My family and members of the congregation believed that I was cured and life continued as normal. However, when I got to university, living my own life and all, I reconnected with my boyfriend and the relationship continued and that was the best time of my life as I felt free and independent. It felt so right being with him and we were already planning a life together when I went home for the June Vacation. When I got home, all was well with no one suspecting anything but they noticed that I was happier and my smile was broader and so they wanted to know what it was that had me singing beans right through the day. A similar thing to what happened in my Matric year occurred, where my aunt accessed my phone and read the messages between me and my boyfriend. She was appalled and all the peace that was prevalent in the home vanished. It was replaced with awkwardness and tension which ended when we had an altercation about the messages to the point where I had to go back to East London to be cleansed and reprimanded by older family members for embarrassing the family in that way.

That was the most terrible experience because the whole family had planned that they were going to de-register me from University so that I could spend time at home healing this disease of homosexuality. Somehow they believed that they could do it against my will. Over my dead body! This was the time I had to be my strongest and tell them no such bullshit would happen. When it was time for me to return to school, I packed my bags and got ready to leave and they had no choice but to let me go and when I got home in Cape town I could not even spend a night in that house since they had agreed to throw away my future like that. I made a vow to myself that night to not depend on anyone but me. All of that meant that I was on my own physically, financially, emotionally and spiritually. That was the hardest time of my life, the sad part is that it has not passed. I am still on my own but I am slowly winning their hearts as we have recently started talking again. I believe the reaction my family had was further inflated by their Jehovah Witness beliefs which encourage them to ostracise any family member who ‘steps out of the right way of life.’

At the same time, this is the best time of my life because I am honest with myself and the world. I present the best version of myself to the world and the world is beginning to accept me for who I am. Being at UCT has furnished me with a lot of opportunities, to better myself and those around me. I am so thankful for my UCT family; it keeps me going every day. UCT has also given me the chance to break barriers and lead in positions where there had previously been no Queer bodies. I am so grateful for this and believe my life at UCT is the stepping-stone to the life that I am meant to live. I encourage all Queer bodies in the world to get up and fight for themselves, even though that may prove challenging or impossible, so that we can start ruling the world. My motto is that VASTNESS is the way, vast being anything extreme, jaw-dropping or extraordinary. I am the embodiment of vastness and hope to achieve total equality and flourishment through vastness. May you all find pleasure and satisfaction in being your true self even though it may not be easy.

coming out
Are You Brave Enough
Related Posts

Man the fuck up! How many times have you heard those words said out loud…

The 70s saw a sexual revolution. Sex went from missionary to Kama Sutra on roller-skates.…

A Mental Health Melt Down